Here at Hosiped, we pride in exploring knowledge as well as sharing it out with others. As caregivers, we know how important it is to disseminate information in a timely, accurate manner so that others can use it to their advantage. It is because of this objective that we are always seeking new knowledge on different aspects that revolve around caregiving and giving it to you freely. Today we explore some of the frequently asked questions about Parkinson’s disease

In getting these faqs, we had to join a myriad of  Parkinson’s Facebook support groups, listen to questions from our patients suffering from the disease as well as join Parkinson’s subreddit that discusses the question in depth. To answer the question, we did not trust our little knowledge only. No, we went ahead and referred to authoritative websites that discuss Parkinson’s and presented the findings in simple, clear answers that anyone can understand.

For now, lets dive into the questions and answers.

What is Parkinson’s disease?

According to WebMd, Parkinson’s disease is a disorder of the central nervous system that affects the nerves that produce dopamine. According to Wikipedia, dopamine acts as a neurotransmitter that is produced by neurons to send signals to other neurons.

A documentary I recently watched on the disease by UC…., PD is the second most common neurodegenerative disease in the US after Alzheimer’s disease.

Patients who have PD do not die from the disorder but they die with it since as of now there is no cure for it.

What is the difference between Parkinson’s disease and Parkinsonism?

What is the difference between PD tremors and essential tremors?

Essential tremors occur when you are doing some activities such as raising up your hands, shaking someone’s hand, eating with a spoon, drinking from a cup on the table etc when you will notice the trembling of your arms.

PD tremors on the other hand occur even at rest.

Essential tremors start on both limbs or both sides of your body which is different from PD tremors that start on one side and spread to the other.

How is PD diagnosed?

For it to be determined that you have PD, you need a neurological specialist who is going to conduct a thorough neurological evaluation to determine whether the symptoms you have are really indicative of PD. Common motor activities could include drawing neat circles, signing your name, holding utensils etc.

PD is caused by the loss of certain neurotransmitters including dopamine.

What are the factors linked to Parkinson’s disease?

What are the common symptoms of Parkinson’s disease? 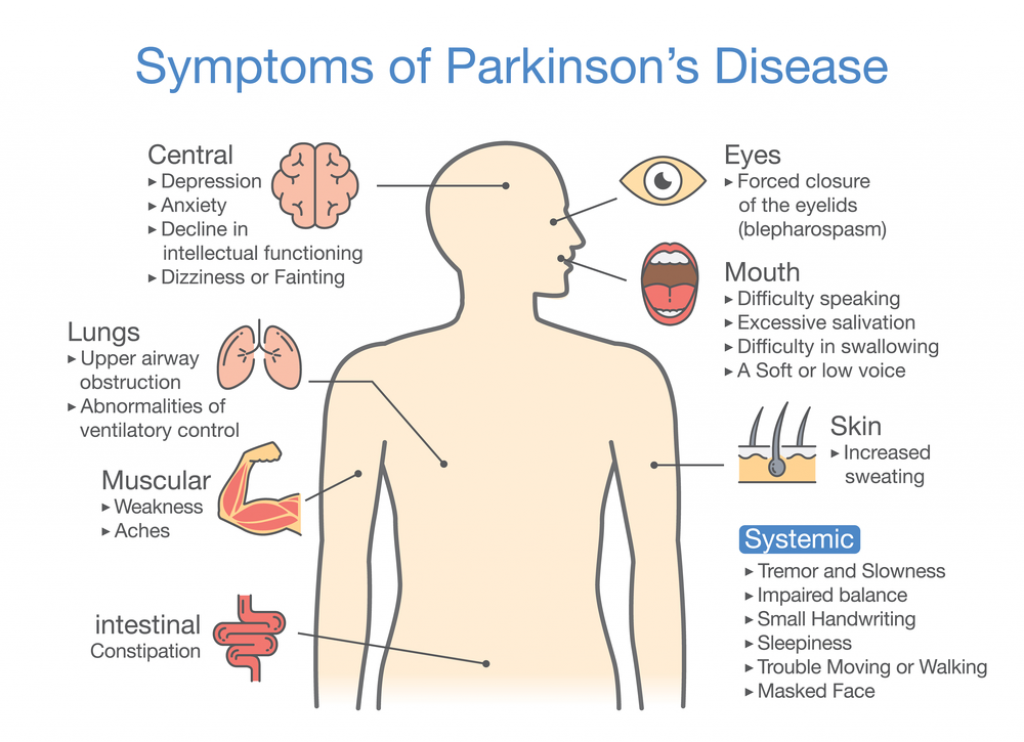 The one most visible and apparent symptom of Parkinson’s disease is the hand tremor. However, having hand tremors does not necessarily mean that you have PD. Other common symptoms include dyskinesia (slowness of movement), rigidity or stiffness of the body.

Is there a known cure for Parkinson’s disease?

Currently, there is no known cure for Parkinson’s disease. All the drugs that doctors give to their PD patients only work to control the symptoms. The underlying disease is never addressed and goes on getting worse with time.

How can one control Parkinson’s symptoms?

Certain drugs have been found to control PD symptoms. They are dopamine agonists that mimic dopamine such as Neupro, Requip, Parlodel, Apokyn among others.

Other drugs that control the symptoms include levodopa and Sinemet, cabidopa that work to…

Cbd oil has also been found to be effective in making the patient less anxious.

What are the best adaptive living habits for people with PD?

Adaptive therapy involves accepting that you have a certain condition and living the best kind of life while you still have that disability. Adaptive therapy for PD involves making changes to how you feed, walk, wear, and write as well as how you speak since PD affects all these functions.

Because of the hand tremors, patients with PD will find that they are unable to eat or drink with ease without spilling their food on the ground. So as to avoid making a mess wherever they are, they need to start using Parkinson’s weighted spoons such as the bunmo weighted spoon as well as non-slip cups for adults. We have reviewed quite a number here and cups here.

We have already mentioned that PD patients have trouble moving around. They either have dyskinesia, dystonia or just rigidity that causes imbalance while walking. As a caregiver, you should strive to get the PD patient some walkers or wheelchairs in the advanced stages of the disorder.

PD patients have trouble sleeping because of the restless legs syndrome, insomnia as well as REM sleep disorder where they are likely to act out their sleep. As they try to act out their sleep, they might fall and you therefore need to get them some adjustable beds as well as install bed alarms so that the caregiver is alerted anytime the patient tries to move out of the bed.

PD patients have trouble buttoning up their clothes and you therefore need to get them some magnetic buttons that can then be fit on their shirts, jackets and trousers for ease in wearing as well as removing them.

Anxiety has also been found to be another problem with PD patients that could even lead to stress or insomnia at night. To avert the problem, there are these weighted anxiety blankets put over the PD patient so that they can relax and feel as though someone is hugging them tenderly.

Other garments that work in the same way include weighed lap pads that are usually placed on kids with sensory processing disorder so that they can concentrate in school. There are also weighted compression vests for autistic adults that help the patient relax and stop feeling anxious.

Pens and pencils for disabled hands

PD tremors are so vigorous that a patient who was previously drawing or writing with a pen would not be able to do so once the symptoms have kicked in. But in the early stages of the disease, they can use weighted pens and pencils that will help them write despite the hand tremors.

What are the best exercises for PD patients?

According to University of California’s  PD clinic and research center, regular exercise is of great benefit to patients suffering from PD since it reduces body stiffness as well as improve mobility and body balance. Some of the beneficial exercises suggested by this source include:

Aerobic exercises such as paced walking on a treadmill, dancing, tai-chi, yoga, swimming as well as forced exercises on a stationary bike pedaler.

DBS is a neurological procedure where a neurostimulator is implanted into parts of the brain so as to send electrical pulses that will stop PD symptoms. The FDA approved DBS for treatment of PD in 1997.

DBS is not without its fault since it could lead to hemorrhage as well as infections during the surgery.

Other side effects of the procedure could include apathy, hallucinations, depression, euphoria, cognitive dysfunction and hypersexuality.

In DBS, the electrodes are inserted either in the subthalamic nucleus or the globus pallidus interna. Once inserted in those locations, they are then connected to a neurostimulator that is placed under the collarbone or on the abdomen. The DBS specialist will then set parameters that suit your body and that will distort the PD symptoms.

DBS has been found to be effective but should only be done to people who have had PD for over 5 years. If your body does not respond to PD medication such as levodopa, it might not as well respond to DBS.

Though DBS has been found to make people reduce their PD medication intakes, it does not mean that you should completely stop using your PD drugs.

6 Alternatives to Toilet Paper: What to Wipe with the Next time You Run out of TP

How to Assemble the Invacare Hospital Bed